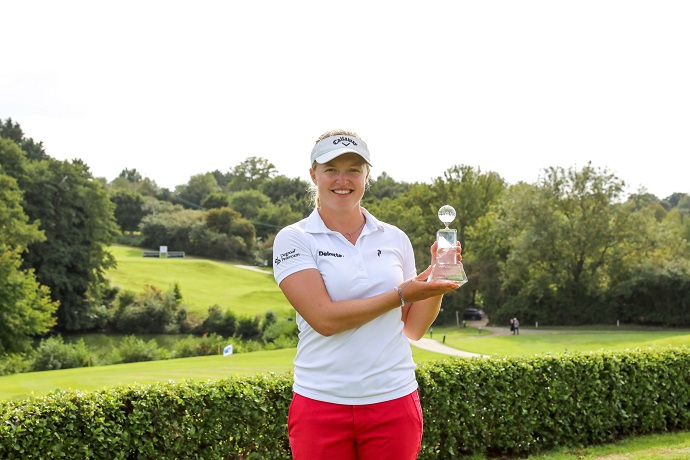 From 8 until 12 august I was participating in the European Team championships in Glasgow to represent Belgium, together with Chloe Leurquin, Christopher Mivis and Lars Buys. The competition was played on the beautiful Centenary course from Gleneagles.
The format was 2 against 2 matchplay followed by a mixed foursome strokeplay event. The first match we lost against Germany and the second match was against England, which was almost inpossible. we had to play against Laura Davies (US Open Senior Champion 2018) and Georgia Hall ( British Open Champion 2018), we lost 4&2 which wasn’t to bad and in the end it was a great experience and honour to play against them. Against Spain we halved the match.
in the mixed foursome stroke play event I played together with Christopher Mivis and we played pretty good with a score of -1. In total (two belgian teams together) we finished 8th. It was such a fun event to participate in and great
experience.

My first win as a professional!!!

After a first round of -4 I was in the lead in this LETAS tournament and I stayed in the lead after another great round of -5. In the beginning of the third round with only one shot ahead of Lydia Hall (defending champion) and two shots from Felicity Johnson, I extended my lead after 9 holes, but than Lydia started to make three birdies in a row. After hole 17 I still had one shot lead but all of a sudden Lydia holed a putt from 4 meters for birdie. I missed the green on 18 and left myself a 3 meter putt for par to go into a Play Off. I had to hole the putt and I did it. Time for a play off. We went back to hole 18 and Lydia was the first to hit, she just left it short of the green, I had a good shot middle green. She 3 putted and I made a good two putt. I WON!!!! Lydia made me really work for it but thats how it should be. It was a great match!

This victory made a big change in my world ranking, I jumped into the Top 500 in the world and currently I am on the ranking for the Olympic Games for 2020 in Tokyo. Also, I went up to the 10th spot in the Order Of Merit on the LetAccess.

But the end is always the hardest. To keep my LET Card for next year, I have to finish in the Top 80 of the Order of Merit or in the Top 5 on the LetAccess. Currently, I am ranked 95 on the LET, this will change a little bit because all the players that hasn’t played 6 events this year will drop out of the ranking. On the LETAS this will be the same.

After all this happened I played in the Estrella Damm Mediterranean Ladies Open (LET) where I missed the cut because losing a lot of shots with putting on Bermuda grass. In October I also played the Hero Women’s Indian Open (LET) where I missed the cut, I didn’t play that bad but I had a few mistakes from the tee which costed me a lot of shots in the end. It was another great experience and also another great country to visit. I went to visit the Taj Mahal which is very impressive to see.

Now there are still 2 tournaments to play:

Lets cross fingers! I will keep you updated.

Talk to you soon and thank you so much for your support.