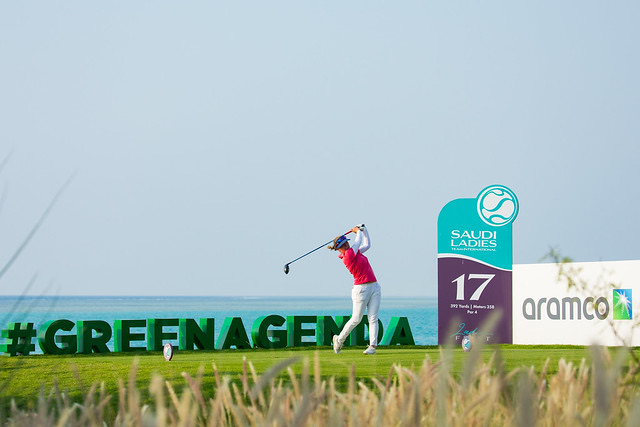 Its been a long time and a lot has happened. After a period of interruption due to the Coronavirus, we started again in August with the Scottish Open and AIG Women’s British open. I finished 18th in Scottish open which I was very happy with because it was already a strong field. Next up was the British open at the beautiful Royal Troon. This was my first major ever and missed the cut by one shot because of a first bad round in extremely windy conditions. It was an unbelievable experience! Missing the cut by one shot in your first major hurts but I learned so much. I will never give up and will come back even stronger next year.

A week later I played the Czech Ladies Open where I finished in the Top 5! Another highlight of this tournament was my first ever Albatros (2 on a par 5!).
In september I played another two tournaments in France and Switzerland and made the cut at both, finishing 20th and 24th.

November was a very busy month with the 4 last tournaments of the season. I started in Dubai under the lights. This tournament is a bit unusual because its played at night under the floodlights. This was the first time for me and I really liked it but you have a lot more to consider. After Dubai it was straight to Saudi Arabia. i was happy to be part of the First ladies professional event in Saudi. Overall, happy with my performance in the individual tournaments but me and my team especially performed well in the ‘Team’ format of the ‘Saudi Ladies’ and finished 2nd.

Last but not least the regular season finished in Spain with the Race to Costa Del Sol – Open De España. I played solid all week and finished the last tournament with a Top 15.
In the end it was a difficult year for all of us but for me it turned out to be a good one. Also finished 4th in the Order of Merit which is also my best finish ever.

I want to take time to thank all my sponsors for their support, without you this all wouldn’t be possible.

I wish you all happy new year and stay safe!